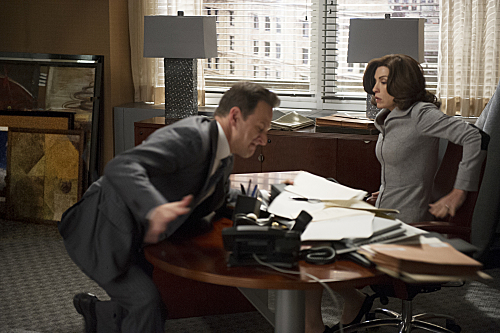 The Good Wife:  Hitting the Fan

The goal of this post is to spread the word about the explosive October 27 episode of "The Good Wife."  If you are a fan of the show, then you know the tension has been mounting as Alicia plots to leave Lockhart Gardner to start a new firm.

In anticipation of the episode, CBS wants to know...which team are you on?  Team Lockhart/Gardner or Team Florick/Agos?

THE GOOD WIFE stars Emmy and Golden Globe Award winner Julianna Margulies as Alicia Florrick, a wife and mother who reinvents her life following her husband’s sex and political corruption scandal.  Four years into her tenure at the law firm of Lockhart/Gardner, Alicia accepts a prestigious partner offer from her bosses, Diane Lockhart, Will Gardner and David Lee.  However, a mutual attraction with Will leaves Alicia conflicted after she agrees to renew her vows with her husband, Peter, who has won the gubernatorial election with the help of campaign manager Eli Gold.  After much thought, Alicia agrees to leave Lockhart/Gardner to start a new firm with her colleague, Cary Agos, who is unable to convince investigator Kalinda Sharma to join them.  Now, Alicia must find a way to balance her evolving career, her new position as First Lady of Illinois and her roles as a wife and mother to her teenage children, Zach and Grace.  Emboldened by the prospect of taking control of her future, Alicia bravely ventures into unknown territory.

ABOUT THE OCTOBER 27TH EPISODE:

The Good Wife is a favorite of mine, because it is just so good.  I get completely into it and I try to watch it as often as I can.

You can check them out on Facebook to keep up with everything that is The Good Wife.

You can also check out a sneak peek of the Hitting the Fan episode on CBS.  While you're there, you can watch clips, full episodes and more.

Disclosure:  This post was sponsored by the Role Mommy Writer's Network.